Rubberduck has been offering IDE-integrated unit test since day one.

But let’s face it: unit testing is hard. And unit testing VBA code that pops a MsgBox isn’t only hard, it’s outright impossible! Why? Because it defeats the purpose of an automated test: you don’t want to be okaying message boxes (or worse, clicking No when the test needed you to click Yes), you want to run the tests and watch them all turn green!

So you had to implement some kind of wrapper interface, and write code that doesn’t call MsgBox directly – like the D of SOLID says, depend on abstractions, not on concrete types.

So you’d code against some IMsgBox wrapper interface:

And then you’d implement the concrete type:

Now that gets you compilable VBA code, but if you want to write a test for code where the result of a MsgBox call can influence the tested method’s code path, you need to make a fake implementation, and inject that FakeMsgBox into your code, so that your code calls not the real MsgBox function, but the fake implementation.

And if you want to verify that the code setup a vbYesNo message box with the company name as a title, you need to adapt your fake message box and make it configurable.

In other words, setting up fakes by hand is a pain in the neck.

So this is where Rubberduck tests are going:

Soon. Very soon. Like, next release soon, Rubberduck will begin to allow unit test code to turn the actual MsgBox into a fake one, by setting up a Rubberduck fake.

So yeah, we’re mocking VBA. All of it.

Some of Rubberduck’s coolest features are literally hidden – not intentionally… but exposing them in the UI just wasn’t a top priority, or proved to be quite complex to implement in a nice user-friendly way.

Sad, because it makes them look like underducks, when they really deserve to show up front & center.

Since v2.0.12, adding a new test module to a VBA project makes it show up under a “Tests” folder in the Code Explorer:

You might be thinking “oh cool, folders!” and then go and try to add one using the Add command, or right-click somewhere to find some “add folder” command, and eventually give up.

Folders aren’t real. VBA doesn’t support folders; the code files aren’t even code files, they’re embedded in a host document! So we can’t just “create a folder” in a VBA project, it has to be something else.

This is what an early-bound 2.0.12 test module’s declarations section looks like:

Notice the @Folder(“Tests”) comment. Folders don’t really exist, but by annotating code modules like this Rubberduck can make them seem real, at least in the Code Explorer.

You can control which module appears under which folder by modifying the annotation, using the dot (“.”) as a separator: 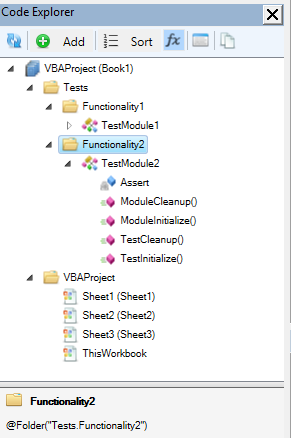 The Code Explorer‘s bottom panel shows the @Folder annotation that’s responsible for creating the selected folder, when a folder is selected (if no folder is specified, everything goes to a default “VBAProject” folder).

Or whatever you want to make it. When two or more modules have “Tests” as a “root folder”, Rubberduck knows to show these two modules under the same “Tests” folder.

This means large VBA projects with a ton of classes can now be organized in folders for easier browsing, like large VB.NET projects are organized in namespaces. Now VBA doesn’t support namespaces, the rules haven’t changed: you can’t have two same-name modules in the same VBA project regardless of which “folder” you’re putting them in. But it sure makes it much easier to organize things.

The reason we can’t have a simple “create folder” command, is ultimately because VBA doesn’t support folders: we can’t create an empty folder, a folder only exists because there’s a module that has an annotation that created it.

What if there’s more than one annotation?

And Rubberduck won’t be confused; the Code Explorer will have that module under the “Tests” folder, and unless there’s another module somewhere that specifies “Foo.Bar”, there won’t be a “Foo.Bar” folder anywhere.

Future versions will probably introduce a quick-fix for that inspection, so that extraneous annotations can be removed without even looking at the code module itself.

Since 2.0.12 you can now make code inspections completely ignore a specific module, with a single module-level annotation:

Now that’s great, but it’s also drastic: all inspections will ignore that module. If all you wanted was to shut off the use meaningful names inspection for that module without disabling the inspection itself, you can parameterize the annotation:

And now only the use meaningful name inspection will be ignored in that module, without turning off the inspection itself.

…of course, the website processes the names to insert spaces (based on the PascalCase casing – that’s why ByVal appears as “By Val”), so the actual usable @Ignore and @IgnoreModule annotation parameters are all in that list, except you need to remove the spaces when using them.